I thought it would be interesting to post some pictures of Father Time along with some other pictures that relate to watches. 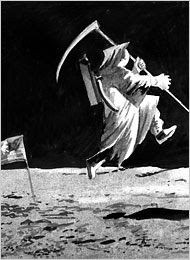 I thought this one of Father Time on the moon was amusing. 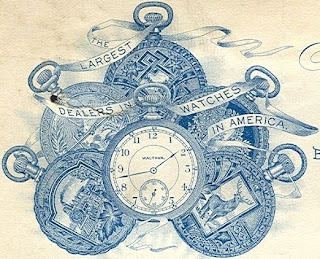 This is one of my favorites about a dealer who sold Waltham pocket watches.  This was from about 1900. 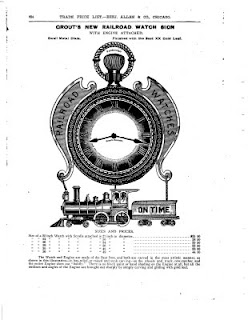 This picture show a page from a watch supply house that also sold watchmaker signs. 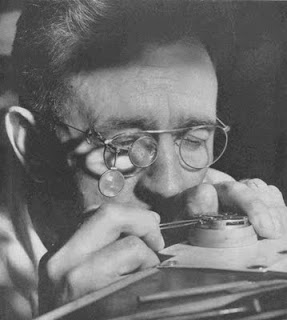 This is a watchmaker at work at the old Elgin National Watch Company. 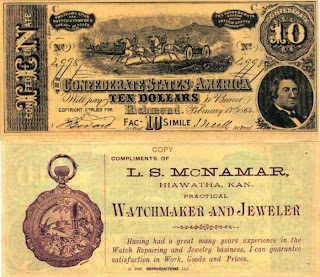 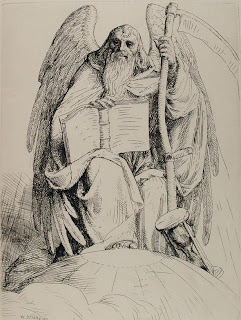 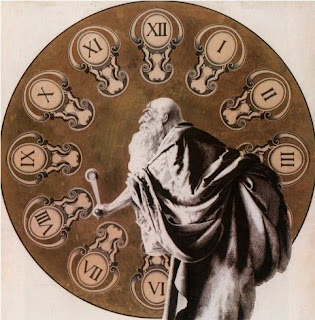 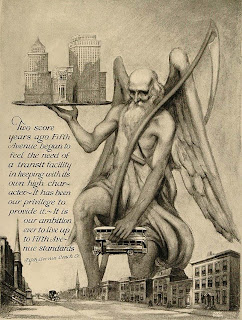 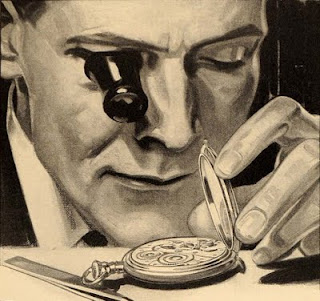 Watchmaker looking at a pocket watch. 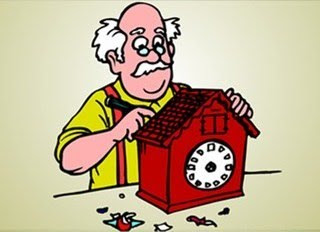 Cartoon of a clockmaker.

We have many more pictures that we have collected over the years.  We will post some more advertisements in another posting.

It is very interesting just how long a men's Rolex can actually function even when the movement displays an obvious lack or care and maintenance.  The pictures below show a Rolex mainspring barrel along with its spring and arbor.  You can see that the lubricant or grease has totally dried out leaving behind a thick abrasive paste like substance.

It is very important to properly maintain your Rolex to prevent this type of abuse.  Dried grease and lubricants can cause premature wear of the movement.

DON'T LET THIS HAPPEN TO YOUR ROLEX!

You should have your Rolex serviced every 5 to 7 years depending on your personal wearing habits.

Note the thick dried grease which is also comprised of fine metal particles from the mainspring.

The barrel arbor is located at the center of the barrel.  Failure to maintain this Rolex resulted in having to replace the entire mainspring barrel along with the arbor.

Just another view of the Rolex barrel.

Posted by Timebuilder American Horologist at 11:48 PM No comments:

The Hamilton Pocket Watch was one of the most well built and constructed watches used in railroad service.  Hamilton had many inovations which made them very good timekeepers.  One of unique features was the motor barrel which supplied even and constant power to the gear train of the movement.  Below are some documents which relate to this feature along with some other interesting Hamilton information.

This diagram shows how the motor barrel operates.  Note the fact that the motor barrel uses two arbors as compared to only one barrel arbor as found in most pocket watches.  The barrel contains the mainspring which powers the gear train of the watch.

Posted by Timebuilder American Horologist at 11:22 PM No comments:

Below are some pictures of the hairspring guard found in a Rolex movement 1570.  The movement serial number is D905606.

This shows the hairspring guard which is the brass wire that is over the balance at the left.

This view shows the hairspring guard over the balance.  Most of these movements have a hole for installing the guard.  The base of the guard has a notch so that it can be rotated away from the hairspring in order to remove the balance for service.

A side view of the Rolex 1570 movement showing the hairspring guard over the balance wheel and hairspring.

This is the dial side of the Rolex 1570 movement showing the date wheel and dial washer.

These Rolex movements are some of the best designed movements that Rolex manufactured.  They are very durable and rugged and will last many years and provide good timekeeping abilities if properly maintained.  If the watch is to be used in a rough environment where it might be subjected to shocks and extreme bumps it may be necessary to have the hairspring guard installed to prevent the coils from jumping over one another.

Posted by Timebuilder American Horologist at 11:10 AM No comments:

Antique Time is your source for fine quality diamond bezels for your Rolex watch.  Each bezel is professionally installed and are designed to fit your Rolex to exacting standards and specifications. 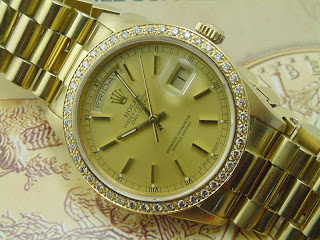 Gents Rolex President with a new diamond bezel.  Each of our diamond bezels are manufactured to fit your Rolex to exacting specifications.  The carat weights are identical to those sold by Rolex.  You also have your choice of diamond quality and weight. 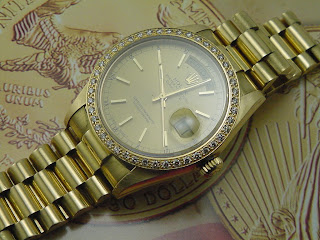 Correct sized bezels should not extend over the edge of the watch case.  There should be clearance to properly operate the crown of the watch. 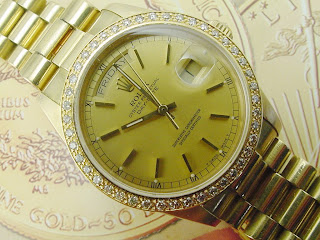 Be sure to contact Antique Time for the purchase of your fine quality diamond bezel.  We also offer the best in Rolex Service and Repair.

We look forward to taking care of all your Rolex service needs.

Posted by Timebuilder American Horologist at 11:59 AM No comments: